Slow meat that's worth the wait 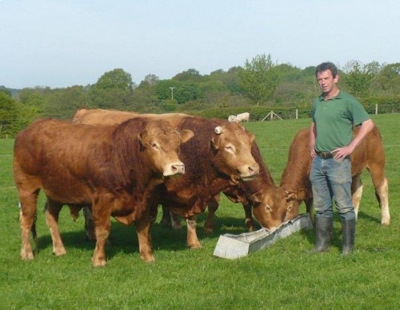 Andy Clarke’s family has been farming for nearly 40 years, more than three quarters of which has been spent at Park Farm in Hawkhurst, Kent, so it would be fair to say he knows a thing or two about rearing quality meat – or, as he calls it, ‘good, honest meat’. Having worked on farms since leaving school  - apart from some time spent travelling around the world - Andy’s approach to farming is traditional, considered and not to be rushed.

“All our sheep and cows are grown more slowly and finished more slowly, because they’re predominantly grass-fed,” he explains. “Our sheep are always outdoors, including during lambing season. It’s cleaner and they are healthier and happier lambing outside. It’s an extensive system, but worth the wait for the flavour.”

Park Farm’s herd of 40 Sussex cows and 150 Romney ewes were selected for their flavoursome meat, and also for their affinity with the Kentish countryside. “Sussex cows come from this area, where they have developed as a breed,” says Andy. “They enjoy the local environment and climate and do well in the South East England. Our Romney ewes are also indigenous – it just makes sense to use local breeds.”

It seems obvious, but it’s a carefully thought-out strategy to produce the best possible meat. It’s the same reason that the cows are crossed with Limousin bulls and the sheep with a Charolais ram – to make the meat less fatty for the healthier but tastier meat that Andy’s customers demand. Park Farm doesn’t breed its own pigs, but hand-picks Berkshire and Gloucester Old Spot weaners from nearby small producers and rears them in a natural environment where they’re free to forage and, as Andy puts it, ‘do what pigs do’.

As well as being part of the Farm Assurance scheme, Park Farm also participates in the Higher Level Stewardship scheme, which helps support the local ecosystem so the farm works in harmony with nature. Andy and his team leave a margin around arable fields and allow hedgerow regeneration to promote the growth of small mammal and bird populations, and has two pastures next to woodland that are not cut at all in summer, meaning the thriving local owls can find plenty of prey in the grasses and wildflowers. “It’s our home, but it’s also home to the other things that live here,” Andy notes.

With Easter ahead, Andy is getting ready for an influx of orders.

“Of course the traditional meal at Easter is lamb, and we have beautiful lambs – last year’s are coming on nicely,” he says – but adds that there’s plenty more on offer than the favoured roast leg of lamb. “A rolled shoulder is a really tasty cut of meat, or a rolled and stuffed loin – all prepared here at Park Farm. Or how about a free-range chicken, or some beautiful 21-day properly hung Sussex beef?  Lots of people like a leg of lamb, but in butchery terms,” he laughs, “lambs only have two legs.”